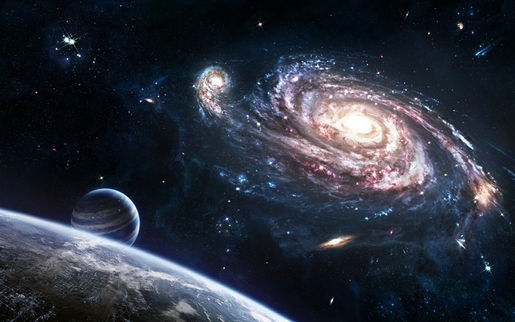 According to the mystic teachings of the East, creation is the enchanted playground of Spirit. The universe we take to be so real is a dream creation of The Supreme Being. It is a magical play of frozen light projected from the consciousness of Spirit.

In the past, such teachings may have been easy to dismiss, however the discoveries of modern science are now coming to very similar conclusions, i.e. the universe consists of forms of frozen light energy that come into being through the act of a conscious mind.

This section is divided into the following sub-sections;

This sub-section provides an overview of creation, the universe and our role in it. It is primarily based on the mystical teachings of the East, as collaborated from ancient times through to modern days. As science progresses, mystics can use the latest scientific findings to help explain creation. For example, modern mystics can make reference to motion pictures, holograms, electromagnetic waves, the dual nature of light, etc. Ancient mystics were constrained to talk at the level of scientific understanding of the times and cultures in which they lived.

The View of Modern Science

We live in interesting times. The astounding discoveries of modern science have revealed a universal structure vastly different from the one defined by Newton, Copernicus, Kepler and others. The astonishing findings of quantum physics over the last one hundred years now points to a view of the universe that is vastly different from what it seems to our human senses. Scientists are struggling to comprehend a world that is not quite so “real”. As mentioned earlier, these findings are leading to a view of the universe that is becoming quite similar to that described by the mystics.

The mystics and modern science tell us that the universe is not what it seems. In fact, reality is quite different from what it appears to be. To help in understanding this mysterious universe and our role in it, many analogies and allegories have been developed and will be presented.

This sub-section is perhaps a bit more challenging to comprehend. It is based on the advanced teachings of the mystics and is supported by modern science. However, if one can accept the premise discussed herein, it opens up a wonderful view of our role in creation and the powerful nature of our individual consciousness – a power that can dramatically change one’s experience of creation.
Top of Page
Basic Creation Model